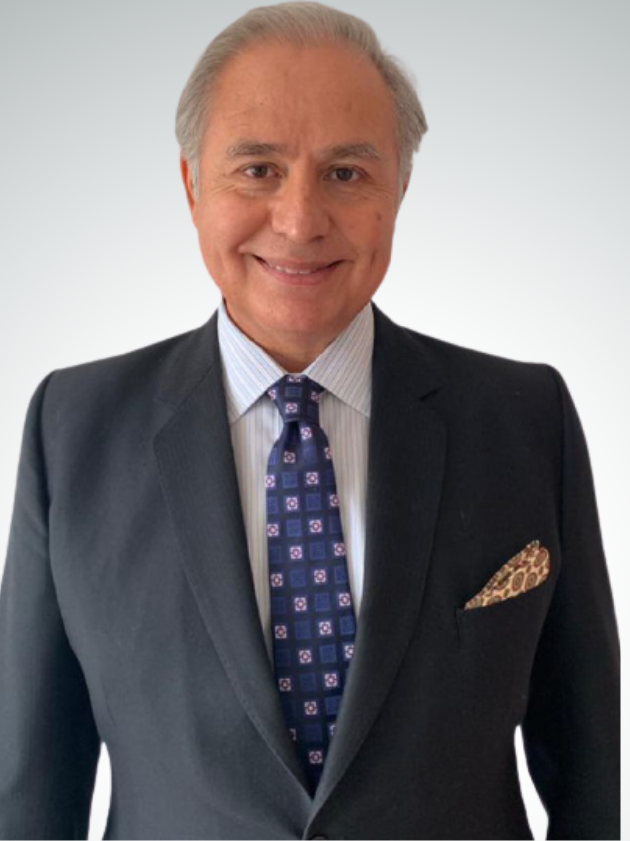 A lawyer with an extensive professional career, focused mainly on the exercise of Criminal Law, where he has led emblematic cases with great repercussion in public opinion. He has advised the National Congress, as well as represented congressmen and ministries. He currently participates in the Congress of the Republic of Chile and is one of the founding partners of MB & CIA.

He also has experience abroad, where he worked on the installation of the International Penal Reform of Peru, a role in which he trained his Public Ministry prosecutors in complex litigation. In Argentina, he trained the Specialized Prosecutor’s Office of that country (UFIMA) in economic and environmental crimes. In addition, he provides cooperation in strategic litigation in economic crimes and anti-money laundering to foreign law firms and companies.
He is currently a lawyer for the Chilean Association of Gaming Casinos; of the Association of Notaries and Conservators and a professor of the LLM of the Faculty of Law of the UC, and of Litigation at the PUCV.

He began his studies at the University of Valparaíso in 1990, where he obtained a Bachelor’s degree in Legal and Social Sciences, to receive the title of Lawyer in 1991. In 2011 he continued his studies at the University of Castilla (La Mancha, Spain) where he completed a postgraduate degree in Economic and Business Criminal Law. He also completed a Master of Laws at California Western School of Law (San Diego, USA) with a specialty in Oral Litigation (Trial) in 2016. In addition, he was trained as an ADL of the Trial Lawyers Bar (ICCBA) before the International Criminal Court ( ICC) and the International Court of Justice (ICJ), after completing the “Fundamentals on Defense Rights Before International Courts” at The Siracusa International Institute, Italy.

With an extensive career, he has received various awards and recognitions. Among them stands out the award for the Best Direct Examination in Criminal Law/Defense and the Best Counter Examination in Civil Law/Defendant in the Oral Trials Tournament, Open Court Modality, Federal Rules, at CWSL, San Diego, USA, in October 2016.
In addition, he is a member of the International Association of Criminal Law (AIDP) and the Institute of Criminal Sciences of Chile (ICP). He is the former president of the Coquimbo Port Company, and former president and former counselor of the Valparaíso Bar Association for several periods.

He has taught and researched Criminal Law and Criminal Procedural Law at the University of Valparaíso, the Andrés Bello University, and Del Mar University. At the latter, he was Dean of the School of Law. He also had experience as a Postgraduate professor and specialization for Oral and Guarantee Judges at the Judicial Academy of Chile.
He was Rapporteur and Trainer in Environmental and Economic Criminal Law for the National Environmental Prosecutor’s Office of Argentina and also in Venezuela through RECAMP. The same in Strategic Oral Litigation for the Office of the Prosecutor of the Nation, through the School of Prosecutors of the Public Ministry. In addition, he was Advisor and Professor at the Superior Academy of the Judiciary (ASMAG) in Peru. He was also a visiting professor at the Economic Criminal Law Seminar at the Pontifical Catholic University of Santiago de Guayaquil, Ecuador. He was also a professor of the Master’s Degree in Criminal Law and Criminal Procedure at the Continental University of Peru and a visiting speaker at the Doctorate in Criminal Law and Procedure and the Specialist in Victimology course at the University of Seville, Spain, in 2007. 2009 and 2011.